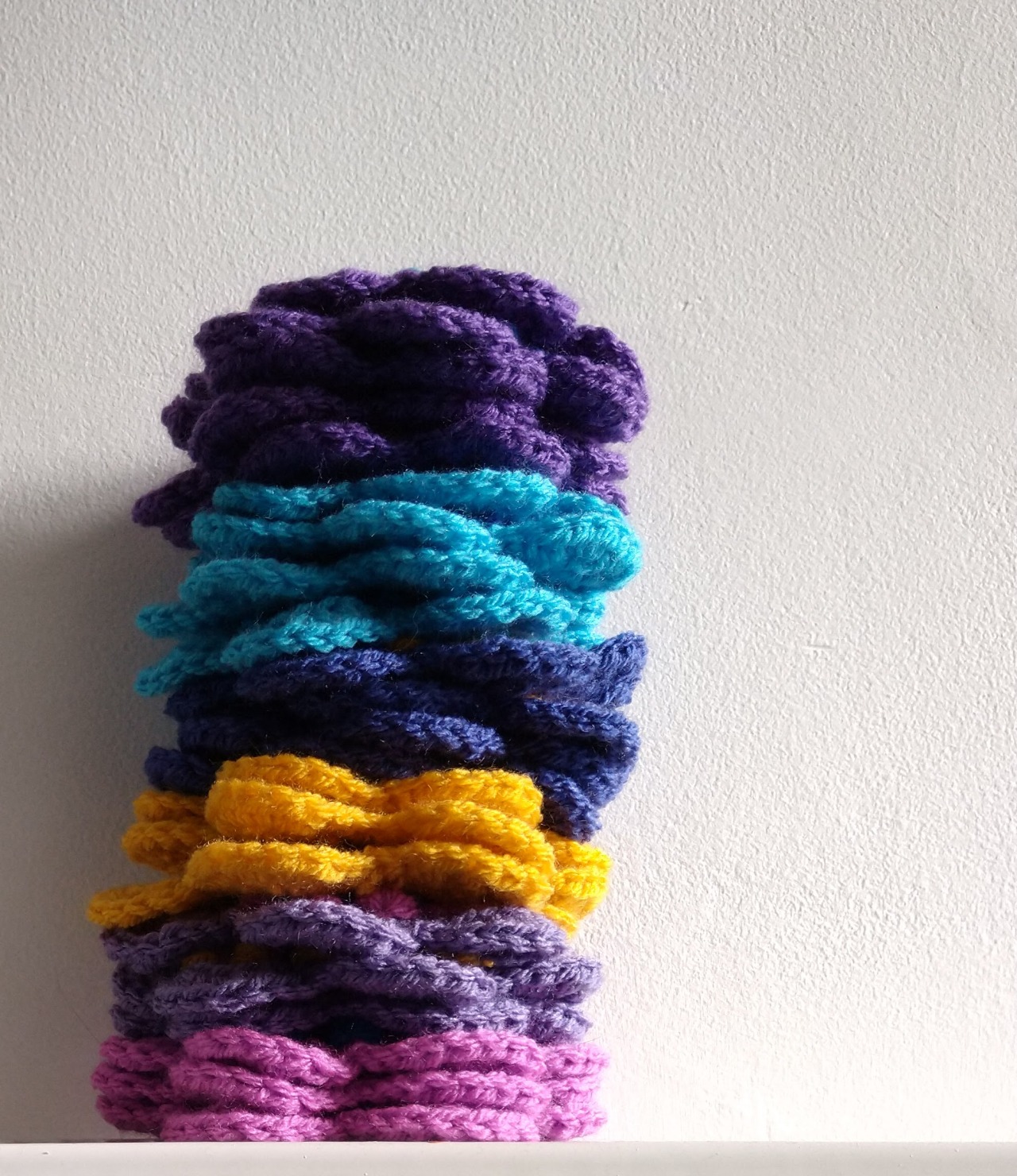 Sometimes it does go and you do have to search for it… but I haven’t had to search for it recently. More time at home means more time to focus on crafty and yarny things and there has been plenty of inspiration around. Right at the start of lockdown I spotted a lovely flowery post on Instagram and had to find out more. I was already working on my Zen of Lockdown shawl so I wouldn’t let myself start something else until that was complete… but I could start planning it.

The Instagram post led me to The Mercerie blog which is written by Sue who lives near Norwich and runs crochet workshops. Some of the finished objects from her previous workshops are absolutely stunning… take a look at the Wallflowers blankets. I would so love to join one of those workshops but obviously that is not possible currently. I also discovered that she runs CALs and had started a brand new one. I considered it… but knew there was really no way that I wasn’t joining in. I signed up and eagerly waited for an email.

So what am I making?? Well, it is a blanket. It has flowers and it has leaves and (at the time of writing) I know we have to join them into strips, then join the strips. Some of the gaps are to be filled with more, smaller flowers. That is all I know. I guess it could be called a mystery CAL… but even Sue herself isn’t sure how it’s going to end. One thing is for sure… it will be a stunning blanket. The pattern is released in stages, as Sue has finalised each part, and comes in an email with helpful links to videos to show you how to complete each stage.

I looked at my yarn collection and decided I didn’t have the colours I wanted and ordered a colour chart initially to help me choose colours. That took longer than normal to arrive but it was ok… I still had knitting to do. I also started drawing flowers and leaves and trying different colour combinations. At some point I decided on a peacock colour theme (I wonder if that was inspired by the skein of Burrow and Soar yarn of the same name?) and searched the internet for colour combinations. I found Pippin Poppycock‘s yarn mood boards along the way… lots of inspiration for colour combinations there.

After much note taking and head scratching I had a list of colours to order, good thing too – the Zen yarn was starting to run out. I was struggling with background colours but thought I would leave those until later and get started with flowers and leaves. Because I wasn’t sure how some of my colour choices would work together, I ordered a few extra colours so that I still had choices to make. Cunning plan eh? So once it arrived I spent a while trying combinations, changing my mind and trying others.

Then, once the shawl was finished, I decided to jump in and have a go, particularly with the colours I was unsure of. I quickly eliminated the ones I thought were too saturated and found my six flower colours. Working in Stylecraft Special Dk, I am using Lobelia, Proper Purple (I considered Royal and Emperor), Violet, Turquoise, Magenta and Dandelion (I considered Clementine).

After a handful of flowers I decided to try a leaf to test out my leaf colour choices. I tried Bottle, Green and Empire. It looked perfectly peacocky but I was still concerned that Empire would be too saturated (I had Teal in mind too) so jumped in with trying it in some flowers as the pattern requires. 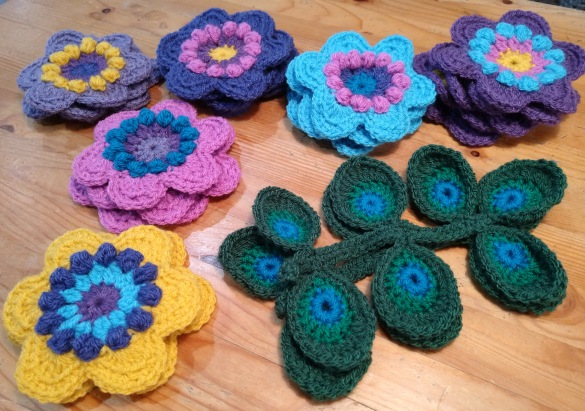 And that is where I am up to. I prefer making the flowers compared to the leaves so I think I will have to alternate between leaves and flowers so that I don’t put them off until later. And I am still very unsure of background colours. I though possibly grey. Cream/ecru have been suggested and Sue also suggested a really retro and loud orange perhaps.

I am now back at work because schools have opened to more children in the UK and I am also going to be working full time for the time being. While I welcome some “normality” and I am really looking forward to seeing the children (sadly I won’t be working with all of the ones I used to work with) I do have a lot of worries and concerns about it. I also have a suspicion that I will be exhausted so my blanket making will probably slow down somewhat!

7 thoughts on “In search of my Crojo.”